When we go to shows and conventions people recognize that the things we make are different from most t-shirts and accessories. And many ask us about our process. We do all our own screen printing and many people are interested in doing that too. And we started out on very little and a lot of folks are in that situation, too.

So I’m writing “Adventures in DIY Screen Printing” and hopefully it will help some other artists who are looking to express themselves the way we are. I feel that the more artists there are doing this, the better it will be for everyone, artists and consumers alike.

Have a look. Feel free to comment or to email me. I always welcome suggestions and I’m always trying to make what I do better.

Thoughts about "Thoughts of Bed" 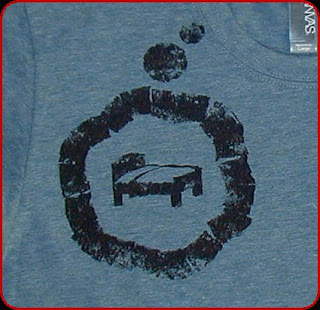 I've started writing down the stories behind the shirt designs I come up with. All of the designs come from influences or situations in my life, so I thought people might like to read about that.

The first one I started with is one of our most popular shirts... Thoughts of Bed.

This is a pretty simple one but there was a journey to get to the end design. As a freelancer and life-long “night person” I’ve struggled with being tired a lot. And maybe, sometimes, I might be the tiniest bit grouchy when I’m sleep deprived. So, I thought it might be nice to warn, um… let people know in a non verbal way, from a safe distance, that it was one of those days.

I started out with a kind of cartoon thought balloon with a bed in it. The basic idea was already there but it was too damn perky looking. So then I tried making it a little more distressed and fuzzy around the edges, but it wasn’t quite right. It just looked messy. Then I thought of an idea that might more accurately reflect my mood. I imagined dipping a square of potato in ink and pressing it into a design with my sleepy fist. So I translated that image into a method of block stamping on the computer in Photoshop. After some playing around with that I had a design that I felt reflected my “Hmn? Grr” mood.
Posted by JayJayJackson at 11:04 PM No comments: 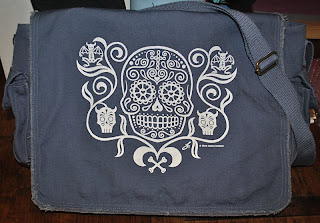 I had a dream. It seemed a modest one, and yet… so out of reach. In 2007 I was already a freelance artist working out of my one bedroom apartment in Brooklyn. But I had wanted to start silk screening the t-shirts and posters that I had been jobbing out for years. You never get exactly what you want when you have someone else produce a product from your art. And it costs much more than doing yourself. But I couldn’t do it alone. Especially in the space I had. Or lack of it.

My dream was to do the kind of innovative stuff I could think up, but couldn’t get the screen printers I hired to understand. I wanted to do eco-friendly stuff, which is far from what most were doing at the time. And I wanted to experiment, try crazy things, play. You can’t hire people to do that for you.

So then Freddy and I met April 24, 2007 at the bar Otto’s Shrunken Head where we had both come to see a band. I commemorated the event with a hopeful diary entry that day which reads “he’s cute, seems nice.” It may not sound all that encouraging but you have to read between the lines of my diary speak. I was cautiously crazy about him. I always write cautiously in my diary. I’m sure that someone will get hold of it and read it. So I make it mostly boring to hide the occasional spicy stuff. Actually, it’s mostly just boring. We’ve been an item since that day. About 5 or 6 months after we met I popped the question and we started Deaths Head Designs.

So we set up the business in Freddy’s basement, hiding the operation from his landlord… we were secret screen printers. Silk screening in secret is a huge amount of trouble. Trust me on this. It’s not something that is easy to hide.

Then, a huge improvement! Those very same band friends of ours that brought us together gave us part of their rehearsal space to set up our operation, which was great, but the lack of heat in winter and sporadic to non-existent water supply to wash out screens caused some problems and delays. Fuses blew out regularly, it was a game of musical outlets.

And even though we did manage, with quite a bit of trouble, to put together enough money to buy the biggest piece of equipment we badly needed, a forced-air flash dryer which all those eco-friendly inks require, we found that the electricity in the building wouldn’t support the unit.

So we weren’t quite there yet… but we started looking for a new place to live that would also accommodate the business. That we could afford. I put almost everything I owned into storage and moved in with Freddy to save money while we looked. And looked. And looked. Almost a year of me living out of a suitcase later, we found our apartment. We had a list of requirements and a list of extras. It had all of the must-haves and a couple of the extras. It was $50 more than the price we had figured we could afford. Not too bad. So we took it. It wasn’t as convenient to public transport as we would have liked, but we had a car thanks to my friends James and Robyn giving me one.

Problems arose. One month after we moved in the car died. The basement has flooded 3 times in the less than 4 months we’ve been here. For 3 completely different and unpredictable reasons, mind you. But we’ve been buying plastic bins and building platforms for everything. And we kept continuing to unpack, settle in and set up our studio.

Well, today we finished our first silk screen job in our new basement studio. Yesterday and today we silk screened shirts and messenger bags and totes. And cured the ink, not with a heat gun, but with our forced-air flash dryer. Which did not blow a fuse!

We silk screened, came upstairs and made lunch and dinner and went back to work. We were warm and comfortable. We had what we needed and our equipment all works! We tried out some new inks I had ordered and they came out great! I just finished wash testing a few of the shirts in the washer and dryer in the basement (NOT coin-operated!) and they came out fantastic. I’ve wanted this for so long. And it feels good. In fact, It feels damn good. Getting what you want the hard way, is still getting what you want, right?

Now if I can only stop the fear monkeys in the back of my brain who are saying that this is all fragile and it could all fall apart tomorrow. Carpe diem. Noctem? I will live for today. Today, anyway. Stop it, Monkeys! 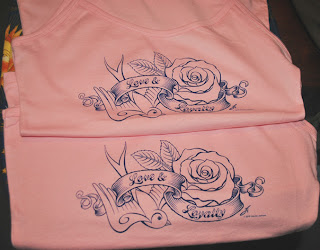 Posted by JayJayJackson at 10:23 PM No comments: