They Always Come Back 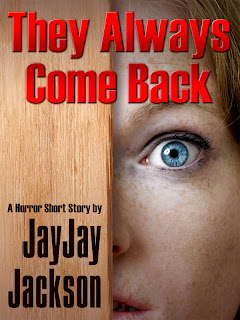 Freddy and I have been dealing with lots of distractions from Death's Head, but on the positive side, I've written a horror story and self-published it on Amazon Kindle and in PDF form.

It has been very well reviewed here on this blog and it has nine positive reviews on Amazon so far!

I worked on the story with my friend and mentor, Jim Shooter, who edited it and wrote an introduction and this description for me:

The love of your life is knocking at the door. He wants in. He’s been dead for weeks. But he’s back. And he really, really wants to be together with you again. “They Always Come Back” is a deeply troubling horror story. It’s a romance, you see.

Jim mentioned it on his own blog:
http://www.jimshooter.com/2012/02/made-to-order.html

If you'd like to read it you can get it on Amazon for the Kindle:
http://www.amazon.com/dp/B00704KTNM

Or you can direct download a PDF version:
http://www.jayjayjackson.com/ebooks.html

I'm also recording an audio version right now. Which is way harder than I thought it would be. But I'm also looking to make it extra ginchy and having an original score written for it by the marvelously talented Joe James. If the preliminary opening music he sent me is any indication, it's going to be incredible. But read the story now! It's only 99 cents!
Posted by JayJayJackson at 6:26 PM No comments: